Formulation in CBT – Breaking the Problem Down

We have looked at how Cognitive Behavioural Therapy (CBT)  can be used to break down a particular problem, low mood for example, into discrete, manageable parts which can then be focused upon within treatment. By breaking down an issue into thoughts, emotions, behaviours and physiology, we can look at a problem objectively and make an informed decision about how we can treat, and make predictions about what will work. We call this process of identifying the problem elements “Formulation,” and this is the main focus of this article.

Firstly, we want to identify exactly what the problem, or problems, are.

Often when we are struggling with our mood, we can lump all of our difficulties into one big over-generalised world-view: My life is sh*t. The reality however may be a little different. If we spend some time identifying and distinguishing individual problems areas we are already on our way to making them more manageable and solvable. The first step in doing this is generating a problem list. This is how we do it…

1. Get a piece of pen and paper and write down a list of all of the issues which you currently view as being problematic. Just keep going with the list until you feel you have ran out of things to write.

2. Looking at your list, think about which of the problems are the most significant or urgent to be dealt with, and which are less important for you right now. If you are having difficulty with this then ask yourself how you think your life would look if each of the problems just miraculously disappeared – which one would have the most impact?

3. Number your list, most significant or urgent problem first, lesser problems later. Remember, this is not written in stone, no one will criticise you if you later want to change your ordering.

Now that we have our ordered problem list, we can begin to formulate.

Even though formulations in CBT can range from being very complex to amazingly simple, it is important to remember that the main aim of formulation is to get an understandable representation of just what is going on.

As an illustration of just how simple, yet meaningful, a formulation can be, take a look at this: 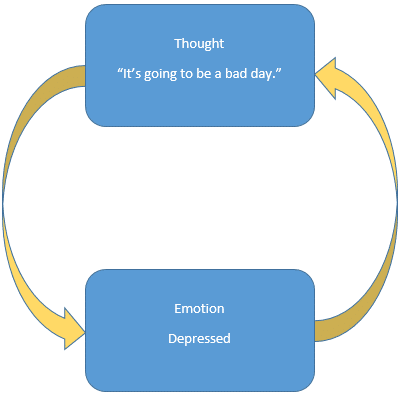 Here we have identified the thoughts which are going through the individuals mind which lead to the emotional state of feeling depressed.

Similarly, we have identified that, when the individual feels depressed, they then appraise this emotional as being indicative of “it’s going to be a bad day.”

Such a simple thought-emotion formulation enables us to understand, and subsequently target treatment for, the individual’s depression problem.

A two system formulation such as this can be useful in understanding the relationship between two aspects of a problem but for our purposes we might want to get a little more detail, and for this we are going to use what is called a five systems or five areas model:

Here we can see one complete problem, the sadness that the Father feels at not being able to stop the baby from crying, can be broken down into 5 different dimensions.

Again, this allows us to objectively look at the presenting problem and decide which part of the problem we might want to look at working on first.

For instance, we might think that the individual’s behaviour of avoiding spending time with the baby will prevent him from having positive experiences with the child, thus maintaining his negative thought, “I’m a useless dad.”

As such, we might want to challenge this avoidance by enabling the individual to undertake certain low challenge, manageable tasks with the child and then measure how this effects the problem overall.

So here we can see that, by using formulation, we can render one big, seemingly unmanageable problem into much more discrete, solvable elements. 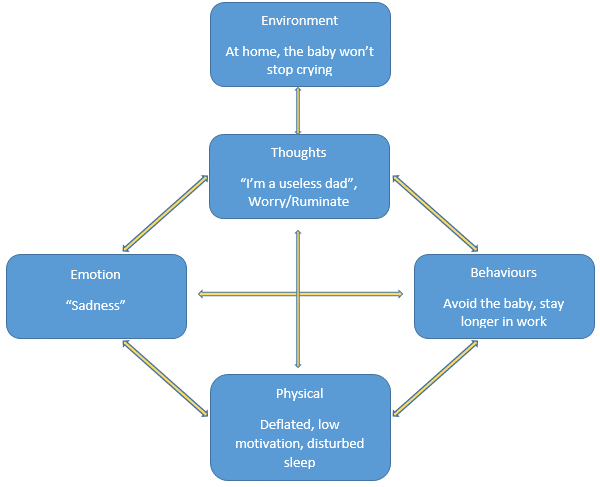 Try formulation for yourself.

Lets have a go at formulation one of the problems from your problem list.

Ideally, we would want to target a problem that will have some degree of impact when it is resolved, but at the same time this is an exercise in using the techniques of formulation so if you feel a particular problem might be too complex to formulate just now then go ahead and choose a different one. It’s up to you.

When you have decided what problem you would like to look at we are ready to have a go at formulation. If it’s possible, you might want to download this formulation template (5-areas-formulation-template) but if not you can just take out a pen and paper and sketch out something that looks like this:

For the first section, “Environment,” we are interested in all the situational factors which appear to trigger or are present during the problem.

These can range from very broad life events to immediately related triggers, examples of which range from bereavement, childbirth, financial problems, health issues, interpersonal difficulties, work stress – just about any situational factors which are related to the problem can be listed in this box.

Next, we want to identify what kind of thinking is particular to the problem. This may take the form of a thought e.g., “I can’t cope with this” or “she thinks I’m useless”, or, as we will discover in later articles, it could relate to a particular  “Unhelpful thinking style” such as mind-reading, or catastrophising.

Sometimes it can take a bit of time and practice (see thought records in Negative Automatic Thoughts Article) to get used to identifying the thinking which is present in the problem but, if we write down exactly what is going through our mind when the problem is occurring then that is good enough for now.

Next, we want to identify what emotion we are experiencing during the problem. Usually an emotion can be summed up in one word such as “anger” or “sadness.” Often people report the emotional state as being the most easily accessible as this is the element that often leads them to seek help.

It’s important to acknowledge at this stage that you should write down whatever emotions you feel in relation to the problem, regardless of whether or not you think it is directly related to our overall theme of depression. People often experience other emotions alongside depression and there is evidence to suggest that for males in particular, the emotion of anger is itself a feature of depression.

Next, we want to identify what behaviours are involved in the problem. Typical changes in behaviour in depression may be reduced activity levels, for instance less social contact or physical exercise, and increased avoidance. Sometimes we may also see behaviours such as increased alcohol use or self harm.

Again, take some time to think about how your particular problem represents itself behaviourally and write it down. Ask yourself, “what do others see when I am engaged in this problem?”

The term “higher order behaviours” relates to mental behaviours such as worry and brooding (or rumination) which, even though they take place mentally, are behavioural in the sense that we can choose to engage in them by way of attempting to resolve a problem. Again, if worrying or brooding are behavioural features of your particular problem then write this down in your formulation.

Lastly, we divert our attention to the “physiology” box. This relates to any and all changes that we experience physically in relation to the problem. In depression, typical physiological changes would include reduced appetite, changes in sleep patterns, reduced libido, lethargy. Further, as anxiety can often be found alongside depression, you may experience physical changes which include physical tension, changes in breathing rate and increased heartrate.

Once we have our formulation written out, we are able to see exactly how all of the problem elements fit together and plan which types of intervention would be most suitable for each element.

There are specific types of cognitive, behavioural, physiological and emotional focused interventions which are covered throughout this website, but first we need to establish how we are going to know that our interventions have been successful, and we are going to do this through goal setting. 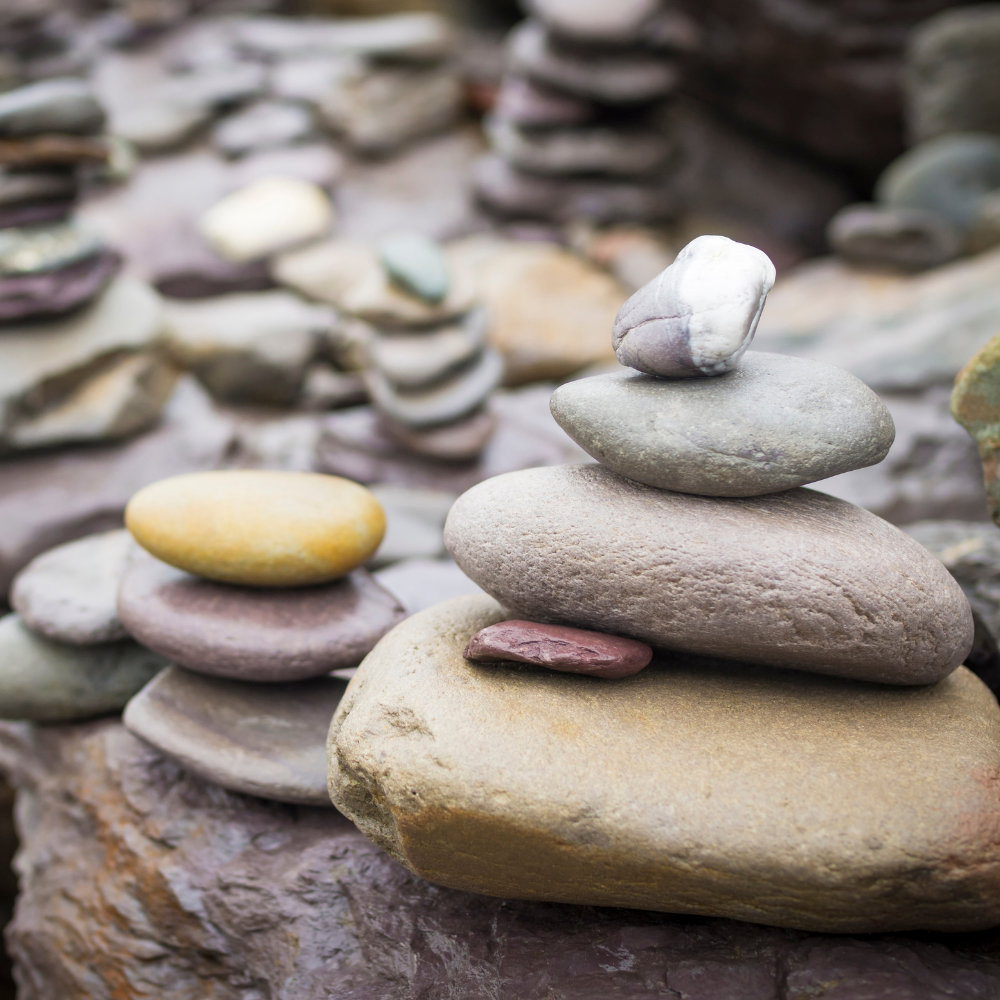 Have You Thought About Getting Therapy? Please contact us to discuss your requirements and one of our friendly team will gladly assist you.

Or alternatively, send us a message on our contact page.

Discover more about our CBT Services

This website uses cookies to improve your experience while you navigate through the website. Out of these, the cookies that are categorised as necessary are stored on your browser as they are essential for the working of basic functionalities of the website. We also use third-party cookies that help us analyse and understand how you use this website. These cookies will be stored in your browser only with your consent. You also have the option to opt-out of these cookies. But opting out of some of these cookies may affect your browsing experience.
Necessary Always Enabled
Necessary cookies are absolutely essential for the website to function properly. These cookies ensure basic functionalities and security features of the website, anonymously.
Functional
Functional cookies help to perform certain functionalities like sharing the content of the website on social media platforms, collect feedbacks, and other third-party features.
Performance
Performance cookies are used to understand and analyze the key performance indexes of the website which helps in delivering a better user experience for the visitors.
Analytics
Analytical cookies are used to understand how visitors interact with the website. These cookies help provide information on metrics the number of visitors, bounce rate, traffic source, etc.
Advertisement
Advertisement cookies are used to provide visitors with relevant ads and marketing campaigns. These cookies track visitors across websites and collect information to provide customized ads.
Others
Other uncategorized cookies are those that are being analyzed and have not been classified into a category as yet.
SAVE & ACCEPT
Powered by